Solar Calendar is the most popularly followed calendar today. The calendar consists of 365 days and is occasionally extended by an extra day to form a leap year. This calendar indicates the revolution of Earth around the sun to measure time. 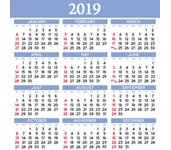 The two types of solar years are:

Sidereal Year: It is measured in relation to the background stars and dates indicate the zodiacal constellation near which the sun can be found.

Tropical Year: In the tropical year, dates determine the season. Whenever the longitude reaches a multiple of 360° the mean Sun crosses the vernal equinox and a new tropical year begin. The tropical year is shorter than the sidereal year.

The Hindu Calendar is the best example of the Sidereal Solar Calendar. It is usually 365 days long and an extra day adds to form a leap year. The 12 solar months are identified with one of six seasons (two months per season). Each month signifies a particular zodiac sign. These are used in fortune-telling and holds great importance in different religions. This calendar can also make use of lunar months. Thus, Hindu Calendar is also called a Lunisolar Calendar.

The Gregorian Calendar is the widely used calendar today. It consists of 12 lunar months divided into four seasons. It is both a lunar and a solar calendar. Other Tropical Solar Calendars are the Coptic, Iranian and Bahá’i calendars.

Islamic Calendar is a perfect example of a Lunar Calendar. Calendars which are synchronized to the synodic period or to the heliacal risings of stars. Lunisolar Calendars are also solar calendars. The only difference lies in the indication of the moon phase.