Tradition of welcoming the New Year by organizing feasts and celebrations has been carried forward since ancient times. Historians believe that New Year tradition were started by ancient Babylonians more than 4,000 years ago. Egyptians, Romans, Celts continued it and now the present generation cherish this tradition by celebrating New Year in the most extravagant manner.

Most countries across the globe celebrate New Year on January 1. This day officially became the first day of the year in 46 BC when Julius Caesar established the Julian calendar. However, many countries and communities follow different calendars and celebrate their New Year in an entirely different time of the year by following their own specific customs and traditions. Given here is glimpse of New Year traditions as observed on January 1 in countries following Gregorian calendar. 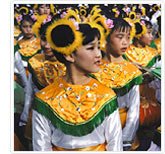 Celebrations begin on the New Year Eve on December 31st. Hotels, restaurants, clubs and pubs organize New Year Eve balls and parties. People sing, dance and make merry. Fun events and contests are also organized to entertain the crowd. As New Year falls at the peak winter time in many countries bonfires are lit to keep the people warm. And just when the clock strikes for midnight firecrackers are burst to welcome the advent of New Year. People greet Happy New Year with a warm hug to every one around them. With loved ones and friends at a distance people exchange greetings through SMSs and phone calls. No wonder, phone network see maximum traffic at this time.

To mark the auspicious beginning of New Year, people wear fresh new clothes and clean up their house. Many prefer to spend this day in the company of their family members and dear ones. People also visit their friends and exchange New Year Gifts and greetings with them. Restaurants, multiplexes and malls experience a busy time on New Year’s Day as many prefer to spend the day by watching movies and eating out with dear ones. There is also a trend of going out for picnics or to exotic tourist destinations to celebrate the day.

One of the most popular New Year custom is to make New Year Resolution. The tradition is said to have been started by early Babylonians who resolved to start the New Year with a clean state by returning borrowed farm equipment. Even in present times, people make New Year resolutions. Though it has been noticed that most people fail to carry them forward beyond the first week of New Year. Some of the most popular New Year resolutions including promises to quit smoking, losing weight, waking up early and being punctual.

In several countries, there is a popular tradition of organizing New Year Parades. In the United States, one of the most famous parades is the Tournament of Roses where the floats are all decorated with flowers. Chinese New Year Parade in San Francisco and the New Year’s Day Parade of London are other most participated and talked about parades of the world. A large number of people throng the entire route of fun-filled parade to watch giant balloons, tableau and dancers in colorful costumes.

In many countries, people enjoy the New Year by indulging in games and sports. Athletics, football, cricket are some of the most popular New Year sports. In some countries, special tournaments are organized for New Year’s Day. Many participate while others enjoy them on TV. In households people recreate by participating in indoor games and activities.