Over the years New Year celebrations has come to be represented through several images and symbols. These New Year symbols conjures up the lively spirit of New Year in our minds and help us to get into the New Year spirit. Given here is a brief description of some of the most popular and widely used New Year images. Many of these New Year symbols are used in New Year decorations and greeting cards. 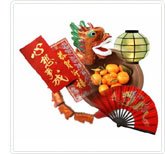 Father Time if one of the most significant symbol used in New Year Eve celebrations in several countries around the world and US in particular. The common image of Father Time is that of an old bearded man dressed in a robe wearing a sash across his chest with the previous year printed on it. A personification of time, Father Time carries an hourglass or other timekeeping device and a scythe. This particular image of Father Time is said to have been derived from several sources, including the Holly King – the Celtic God of the dying year, and Chronos – the Greek God of time.

The Father Time hands over his duties to the Baby New Year, which is the symbol of “New Year” and is depicted as an infant wearing a sash with the new year printed on it. Father Time and Baby New Year thus serve as metaphors for death of one calendar year and the birth of a new one.

This Baby New Year grows up into the old bearded Father Time at the end of the year. At this point, he hands over his duties to the next Baby New Year.

Bursting crackers and noise making fire-works are a popular image of New Year celebrations. It is said that use of noisy fire works on New Year’s eve emerged from a popular belief of olden times that said noise and fire helped to dispel evil spirits and bring good luck.

Candles are used as a traditional symbol of New Year. Glowing taper candles are often seen on New Year Greeting cards and are widely used for New Year decorations. It is said that the use of candle as an auspicious symbol emerged from a belief popular in early times which suggested that smoke from the candles would rise and reach the heavens above. This would ensure that God will answer their secret prayers said over flames of the candle. In modern times people believe that candles spread light, cheer and warmth around.

Lighting of Bonfire is a popular tradition of New Year Eve celebrations. Bonfires immediately pulls people around it because of the warmth as New Year falls at the peak of winters in most countries. Hence many of the celebration activities like dancing and singing are centred around bonfires.

Many of the traditional Christmas Symbols are also used as New Year symbols. This is because New Year falls just a week after Christmas and the festivities of Christmas continue till New Year’s day. Some of the popular Christmas symbols also used in New Year include Christmas Tree, Evergreen, and Holly and the Yule Log. Tradition of burning decorated Yule Log in fireplace is particularly relevant as it symbolizes the light coming back to conquer darkness.

Janus – the Roman God with two faces, one head looking forward to the New Year and the other looking back at the old is yet another image associated with New Year.

In several countries, grapes, lentils, nuts, pomegranates and mistletoes are used as auspicious New Year symbols. Use of grapes and lentils is said to ensure prosperity. The tradition of consuming grapes on New Year is particularly rampant in Italy. Here a popular saying goes, “eat grapes on New Year’s Day and you’ll be counting money the rest of the year”. Pomegranate fruit is also served to guests as the fruit is associated with fertility and abundance. Mistletoes are considered a good luck charm. Hence in several places New Year table is often decorated with a sprig of mistletoe.