Noruz or Persian New Year falls on spring equinox around March 21st according to the Gregorian Calendar. Festival preparations begin well in advance. Noruz lasts for 13 days. It is a special day for Iranians. They believe on this day, earth is recreated and new crops grow. New Year rituals and customs performed in Persia make these celebrations a gala affair. 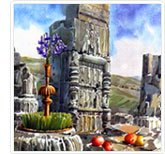 Numerous New Year traditions are performed by the people of Persia. These rituals are performed with same devotion and gusto in Persia as it was practiced in earlier times.

Traditional Eidi
It is in the tradition of Iranians to meet the relatives and older family members from first day till 12th day of New Year. Gifts and other precious items are exchanged in due course. It is considered very important by the people that all personal disputes are sorted out otherwise it is supposed to bring bad luck. Children pay homage to their elders and children also receive Eidi which is money given by their elders as a New Year’s gift.

Tradition of Planting Seeds
Another tradition of planting wheat or lentil seeds are used to make Sabzeh which are considered highly auspicious. People perform these rituals with sincerity and devotion. It is supposed to symbolize rebirth.

Tradition of Sweets
A popular tradition is to place something sweet outside the home, a night before the New Year. Then on the first morning, first person comes into the house with that sweet thing which is another means of attaining good year.

Traditional herald – Haji Pirooz
A traditional messenger of Noruz is called Haji Pirooz or Hadji Firuz. He brings in good news for the people. He is related to the rebirth of the Sumerian God of Sacrifice, Domuzi who was killed at the end of the year and is supposed to reborn at the beginning of the New Year. Haji Pirooz sings and dances through the streets wearing dark make up and a red attire.

On the first day of Noruz, all family members sit around haft-sin table and pray for each others’ good health and prosperity. Then they hug and kiss each other. Special meal is eaten by all the family members sitting together. It includes sabzi pulav (rice with vegetables), fish and kuku sabzi (herb quiche).

The 13th day of the New Year is called Sizdeh bedar. On this day, nobody stays at home as it is considered unlucky. People throw Sabzeh which are grown at home in running water tor remove all the bad luck from their home. At the end of the day, people eat a special noodle soup for Sizdeh bedar. It is also customary for unmarried girls to tie the leaves of the Sabzeh to get married before the next year’s Sizdeh bedar.

After performing all rituals, it’s time to party for the people of Persia. Many people also indulge into huge parties and balls. Some people even throw New Year parties to spend some good time with their near and dear ones.