We must thank Romans for making January 1 as New Year’s celebration day! It used to be March as the New Year celebration month which observed a new beginning of fertility and growth. Before Romans started celebrating it on 1st of January, and before the advent of calendars, a year was considered to be the period between the time of sowing and harvesting of seeds. It is believed to have been celebrated in Mesopotamia in 2000 B.C. around the vernal equinox in March which is the earliest recorded period of New Year celebration. An assortment of other dates have also been associated with different other cultures. Like the observed it on winter Solstice whereas the Egyptians celebrated at the fall of equinox. 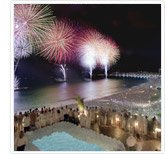 March 1 has been designated as the day of New Year celebration in the early Roman calendar. It consisted of only ten months which began from Mach and ended in December. This pattern of New Year celebration in the month of March still gets reflected in some of the name of the months. As per the earlier Roman calendar September to December was considered to be the seventh to tenth month of the year, which has now changed to ninth to twelfth. “Septem” in latin means seven, similarly “octo” is eight,” novem” is nine and “decem” is ten.

January 1 became a part of the calendar

January and February became a part of the Roman calendar when the second king of Rome, Numa Pontilius added these two months. January did not even exist in the calendar until 700 B.C. New Year was first celebrated on 1st of January in Rome in 153 B.C. The reason behind moving the New Year from March to January was that in this month the two Roman consuls, just elected in the highest office of the Roman Republic began their one year tenure. Even though the New Year was shifted to January from March, the phenomenon was not strictly observed and it was still observed on 1st March by many.

The Roman calendar had become widely inaccurate over the years which were based on lunar system. Julius Caesar in 46 B.C. made an improvement in the Roman calendar with the introduction of a new solar-based calendar. With the advent of the Julian calendar January 1 became widely known as the date of New Year celebration.

With the advent of the Gregorian calendar in 1582, January 1 was restored as the New Year’s Day. Though it was only gradually adopted by many protestant countries most Catholic countries adopted the calendar without any delay.