New Year’s Day marks the end of one year and beginning of the other. New Year is celebrated by all countries that measure yearly calendars. Most countries across the globe follow the Gregorian calendar and celebrate their New Year’s Day on January 1. In several countries January 1 is a holiday. Grand bashes, balls and parades are organized to welcome the New Year and bid adieu to the old.

New Year’s Day is said to be the oldest and most universally celebrated holiday. The tradition of celebrating New Year’s Day is said to have started by Romans circa 153 BC. Romans celebrated their New Year on March 1 according to old Roman Calendar. Even before the Romans, Mesopotamians are said to have celebrated new years at the time of the vernal equinox in mid-March around 2000 BC. After a series of changes in calendar, in 1582, Pope Gregory XIII instituted the Gregorian calendar still in use today, and set January 1 as New Year’s Day. 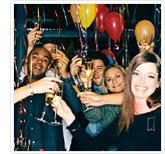 New Year Day Celebrations begin on the eve of the New Year on December 31. Late night parties and bashes are organized to give farewell to the year gone by and welcome the New Year. Just as the clock strikes for midnight, people hug everyone around and wish each other a ‘Happy New Year. Cakes are cut and firecrackers are burst to give a celebratory welcome to the upcoming year.

On the New Year’s Day people wear bright new clothes and spring clean their houses. At several places people follow the tradition of ‘first footing’ and do not leave the house before someone comes in first. First footing person should ideally get some gifts and is accorded a warm welcome by the people. Later, people move out to exchange greetings and New Year gifts with their friends and dear ones. Popular New Year gifts include cake, flowers, chocolates, decorative and New Year Greeting cards. The idea behind exchanging gifts and greetings is to give warm wishes for a New Year and strengthen the bond of love shared with dear ones.

There is also a very strong tradition to make New Year Resolutions on January 1. This is done to give away old bad habits and adopt better ones. Some of the most popular New Year resolutions include weight reduction, quitting smoking, giving up junk food and being punctual. Though it has been noticed that many people fail to keep their resolutions a week after New Year’s Day, the importance of making a fresh New Year’s Day resolution every year is still the same.

Several countries observe a holiday on New Year’s Day. And in some countries, especially those dominated by Christians have their Christmas holiday extended till New Year’s Day. Hence, people have all the time and reasons to celebrate the occasion. A popular trend is to go out for vacations in tourist places. Those who are unable to go in far off places go out for picnics, campings, trekking, skiing etc. A huge rush is also observed in malls, theaters and restaurants as many people especially, youngsters celebrate the New Year’s by moving out with their dear ones. Some countries organize New Year Day Parades and Sports, many people participate and witness these joyful events. Those who prefer a bit of sobriety organize New Year’s Day parties in their homes and spend the first day of the year with their friends and dear ones.