Lunisolar calendar is the combination of solar calendar and lunar calendar. This calendar is more successful in indicating the season than the lunar cycle. If the solar year is taken as a sidereal year then the calendar will predict the constellation near which the full moon may occur.

Given below are some examples of the Lunisolar calendar:

A Lunisolar Calendar can be divided into two forms: 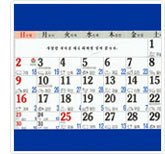 An arithmetical Lunisolar calendar consists of an integral number of synodic months which are fitted into the years by a fixed rule. A synodic month is the mean interval between conjunctions of the Moon and Sun corresponding to the cycle of lunar phases.

Calculation of the Calendar

The 8-year cycle including 99 synodic months and 3 embolismic months (an intercalary month) was earlier used by the Athenians. It was also used in early third century Easter calculations in Rome and Alexandria.

The 19-year cycle is the classic Metonic cycle. It is used in most arithmetical lunisolar calendars. It is a combination of the 8- and 11-year period. In case, any error occurs in the 19-year cycle then it can be shortened to the 8 or 11-year cycle. By doing this the 19-year cycle can be started again. The Metonic cycle does not have an integer number of days, but it was adapted to a mean year of 365.25 days by means of the 4×19 year Callipic cycle.

An 84-year cycle was used by the Rome from the late third century until 457. Similarly, Christians in Britain and Ireland also used an 84-year cycle until the Synod of Whitby (7th century Whitby in Northumbria).

Calculation of a Leap month

The frequency of the intercalary or the leap month can be derived from the following calculation, using approximate length of months and years in days:

The Hebrew and Buddhist calendars restrict the leap month to a single month of the year. Thus, the number common moths between leap months is usually 36 months. On the other hand, the true motion of the sun is used by the Chinese and the Hindu calendars. This increases the usual number of common months between leap months to an approximate 34 months when there is a doublet of common years and reduces the number to 29 when there only a common singleton occurs.