A Lunar Calendar indicates the moon phase. It is synchronized with the movement of moon. The best example of the Lunar calendar is the Islamic Calendar.

Most lunar calendars are also lunisolar, such as the Hebrew, Chinese and Hindu calendar. The reason for this is that a year is not evenly divisible by an exact number of lunations, so without any correction the calendar year will drift with respect to the seasons.

This calendar consists of 12 months based on the movement of the moon. The calendar has 354 days because an average synodic month has 29.53 days. Islamic Calendar is slightly shorter than a tropical year. It is sacredly observed by the Muslims. Thus, it is mostly used for religious purposes. 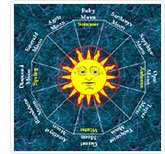 The Chinese lunar New Year is based on the cycles of the moon. It was introduced by the Emperor Huang Ti in 2600BC. Thus, the cyclical dating determines the beginning of the New Year. It varies every year and can fall between late January and the mid February. A complete cycle takes 60 years made up of five cycles of 12 years each.

Determining the start of Lunar month

There are no fixed arithmetical rules to the Lunar Calendar as the observations are uncertain and depend upon weather conditions. The length of a month cycle is difficult to predict and varies from its average value.