Losoong is the New Year for the people of Sikkim. It generally, falls in the month of December and marks the end of harvesting season. The highlights of the festival are Chaam dances and archery contests.

Sikkim New Year festivities are marked by the most popular Chaam Dance or Lama Dance. These religious dances creates a drama in which men become gods in attires of mystical symbols. Chaam dance indicates the victory of good over evil and are performed at the most famous Tsug Lakhang, Phodong and Rumtek monasteries. 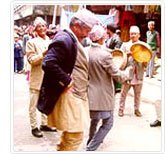 Losoong festival is also famous as Sonam Losoong (Farmers’ New Year). It falls on the 18th day of the 10th month of the Tibetan lunar calendar and dots the agricultural New Year when rice and grains are in plenty. People of Sikkim celebrate this day by performing a very famous Chaam dance. They also make offerings to the gods, both in gompas and in their domestic shrines. Sonam Losoong is more of a private affair. People get up before dawn to take bath and wear new clothes. Later, all the family members sit together to perform poojas for peace and prosperity. This festival lasts for 15 days. Another important day called Nyempo Guzom falls amidst the festivities of Losoong. It is considered inauspicious to venture into new projects on this day.

A traditional stage fight symbolizing victory of good over evil and passing through the crowds with fire torches are practiced. Amidst all this, archery contest also takes place. Kagyed dances (monastic dances) also the famous dances which precede the Losoong festival