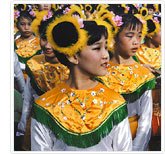 The New Year’s Day Parade of London is an immensely popular and highly participated colorful event. The annual parade is being held since 1987 and has grown in popularity over the years. More than 10,000 performers participate in the parade and it takes more than 2 hours for the full parade to pass by. The event is internationally popular and people from US, Japan, South Africa and the Caribbean come to be a part of gala London New Year Parade. Some of the most attractive feature of New Year’s Day parade have been mentioned below.

Scintillating Chinese New Year Parade in San Francisco is ranked one of the top ten parades in the world.

Brief History of the Chinese New Year Parade
In 1849, with the discovery of gold and the ensuing California Gold Rush, along with others many Chinese came to San Francisco to seek a better way of life. By the 1860’s, the Chinese were eager to share their culture with those who were unfamiliar with it. They chose favorite American tradition – the Parade to showcase their culture. Nothing like it had ever been done in their native China. They invited a variety of other groups from the city to participate, and they marched down carrying colorful flags, banners, lanterns, and drums and firecrackers to drive away evil spirits.