New Year in United Kingdom is celebrated on January 1, the first day of the first month as per the Gregorian Calendar. This day was officially declared as New Year’s Day in 1752. It is the time to ring out the old year and bring the new one by merry making.

New Year is the much awaited celebration for the people of UK. They love to enjoy each and every minute of the going year. Theme parties, salsa dance and live performances are the some of the rocking events of New Year in UK. Another enthralling part of the New Year festivities are the New Year cruises in England. These are the most unique and memorable part of New Year in England. So, if you are planning to have an exciting New Year blast, England is all set for one. 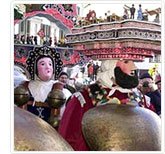 A very old custom of ‘first footing’ is still followed in Britain with sincerity. It is said that the first male visitor to the house on the New Year’s day brings good luck. A blonde, a red-haired or a woman is not allowed to enter the house first as they are supposed to bring bad luck. The male visitor usually brings money, bread or coal as these are considered auspicious gifts. At some places, there is a tradition of gifting the holy mistletoe. It is believed to bring prosperity for the recipient. Another tradition which is popularly celebrated is the “burning of the bush”. It symbolizes burning of all past events.

New Year celebrations in Britain is a colorful affair. New Year is celebrated as the most important festival in United Kingdom. Midnight parties, lavish meals, champagnes, music, dance and fireworks are the important parts of New Year in England. It is the biggest night-out of the year.

Apart from parties and meals, another important part of New Year celebrations in UK is the biggest New Year parade. The parade starts at noon walking down the streets via Whitehall, Pall Mall and finishing in Berkley square. Musicians, dancers, acrobats, march, drums and other entertainers do a splendid job to make the event most distinguished one. Everyone present at the Berkley is openly invited to join the carnival and enjoy the festive occasion.