Thai New Year is also called as Songkran. It is celebrated for three days from April 13 to April 15 every year on the Gregorian Calendar. Songkran falls on the hottest time of the year in Thailand. It comes from Sanskrit and means ‘a move or change’. The date of Thai New Year was set according to the astrological calculations. 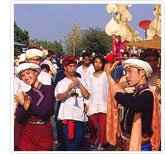 Traditions play a very vital role in presenting a true picture of New Year celebrations in Thailand. Traditional activities are performed with serious dedication by the people of Thailand. A most common tradition of throwing water over one another is performed with fun by the people. It is conceived to bring good rains all year ahead. This is called Rohd Nam Songkran, meaning ‘The Pouring of Songkran Water’.

Wan Nao
A game called Saba (like skittles)is played by most of the people. People build pyramids of sand called chedis on the riverbanks and put on a tiny colored flag on it. This is an example of a very popular traditional activity of people of Thailand.

Wan Payawan
It is celebrated on April 14. All statues of Lord Buddha are washed with scented water. People visit monasteries and shrines to offer prayers and gifts like rice, fruits, sweets and food for the monks. Following this is the custom to release birds from the cages or fish from the bowls. This is believed to bring good luck for the members of the family.

Songkran celebrations leave joy and happiness on the faces of people. After performing all customs seriously, it’s time to have some blast. A Songkran procession takes place in Chiangmai (a famous place in Thailand) on April 15. Buddha images and idols are carried through the procession. It is accompanied by people of the city singing and dancing all around.

Songkran celebrations are incomplete unless water is thrown on each other. People roam the streets with buckets of water and children play with water guns to drench people. Water is thrown to get rid off all the bad deeds and give a fresh welcome to the New Year. Songkran is celebrated to refresh and renew in the New Year.

While playing with water, Thais keep wishing Sawatdee pi Maï, basically Happy New Year to all the people they come across.