New Year in South Africa is celebrated with extreme fun and enjoyment. It is one of the best places to plan for a perfect New Year celebration. According to Gregorian Calendar, New Year in South Africa is celebrated on January 1. The excitement and enthusiasm can be seen on the faces of people many days before the event. They wait for the New Year with full energy. Church bells are rung and gunshots are fired to welcome the New Year. 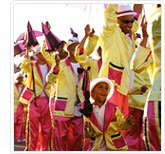 Music, songs, dance and a lavish dinner are an important part of New Year celebrations in every part of South Africa. New Year celebrations at The Victoriav and Alfred Waterfront in Cape Town are globally popular for the scintillating fireworks, singing, dancing and much more. Another world famous event is the Cape Town Minstrel Carnival. This event is noted for its colorful parades. Entertainers in fancy dresses dance on the beats given by the marching bands. This popular New Year Parade move through the city – streets entertaining people of various localities.

New Year in South African houses have always been a gala affair. People like to spend the day with their friends and family members by partying altogether or by having a sumptuous meal at a good dining hall. Thus, New Year is the best time for the people of South Africa to get a break from their strict schedules.