“Say hay boke-mahn he pah du say oh” is the NewYear’s greeting in Korea. New Year’s day is the greatest celebration of the year in Korea. Like, Chinese and Vietnamese, Korean New Year (Seol-Nal)is also celebrated at sunset on the day of the second new moon after the winter solstice. It is a Lunar New Year (harvest moon festival). Seol Nal is a three day celebration and almost all Koreans move to their hometowns to celebrate the occasion. 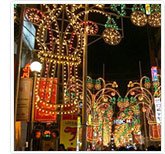 New Year Eve is also called Sut dal kum mum in Korean. On this day, people clean their houses and light it with colorful halogens. At the evening of this day, Koreans take a bath with hot water and burn bamboo sticks to casts off the evil spell. As per the Korean belief, no body should sleep on that night otherwise the eyebrows would turn white. Lights of every room and kitchen are kept on all night. This is a special way to welcome the New Year with brightness and open eyes.

Koreans wake up early in the morning, take bath and wear new clothes called Sol Bim (hanbok). They make Sae Bae (bow) to the parents and grandparents. New Year wishes are also exchanged called Duck Dam. Children are highly elated with the New Year celebrations as they receive cash from their elders. Women spend all day preparing sumptuous meals. They make Ttokuk which is the most important dish prepared for the day. Other dishes include garettok, fried meats, fish, dried persimmons, a variety of, walnut, dates, vegetables, traditional cookies etc.

It is customary for family members in Korea to drink a glass of a special liquor called vgui balki sool. This liquor is said to improve the power of hearing. Consumption of this liquor on New Year enables ones to hear clearly all year long. Then comes the time to serve the ancestors. This tradition is popularly known as Chesa. In a clean room, a table altar is placed covered with several food items. Given below is the specific order of food placement:

Jwa po woo rye: On the left – Meat. On the right – Rice Drink

On a special paper called Chi Bang, the names of the ancestors are written. On the left – men’s name and on the right – women’s name. The names scribbled should be in a perfect order from great great grand parents to the parents’ names.. Such rituals are performed to give energy to the deceased ancestors to give blessings to their descendants.

After performing all rituals seriously, it is the time to have some fun and enjoyment. Some most popular games like yut game, kite flying, top-spinning, jae gi cha gi skiing are played on Soe Nal. Yut-nol-ee is one such traditional game that can be played anywhere with great enthusiasm. It is a stick throwing game played from New Year’s day until January 15 called Daeborum. Games like Jae gi cha gi (similar to kicking hacky sacks) are also enjoyed by young kids.