Celebrations for New Year begin from New Year’s Eve on 31st December. This is the last day of the Gregorian calendar and the day before New Year’s Day. The idea behind New Year’s Eve celebration is to bid adieu to the year gone by and give a warm welcome to the coming year. Popular way of celebrating New Year’s Eve is to party until the moment of the transition of the year at midnight.

Tradition of celebrating New Year’s Eve vary in several parts of the world due to cultural variations. In most countries people cut cake as the clock strikes for midnight on New Year’s Eve and open champagne bottles to express their joys. Given here is a brief description of some of the other most popular and interesting traditions of New Year Eve celebrations. 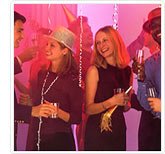 A common image of New Year’s Eve celebration is the incarnation of Father Time – the old year represented by an old bearded man wearing a sash across his chest with the previous year printed on it. This Father Time hands over his responsibilities to the Baby New Year – the personification of New Year represented by a baby wearing a sash with the new year printed on it.

Inspired by an old Scottish tune, the song Auld Lang Syne (meaning ‘the good old days’) has become the National Anthem of New Year’s eve celebration. The song is traditionally sung at the midnight on the New Year’s Eve in almost all English speaking countries of the world. The lyrics to the song Auld Lang Syne were written by the poet Robert Burns and published after his death in 1796. Bursting of Firecrackers In most parts of the world, people welcome the New Year by bursting noisy firecrackers. Some even fire celebratory gun-shots. The tradition emerged from an ancient belief that noise and fire helped to dispel evil spirits and bring good-luck.

Just as the clock strikes at midnight on New Year’s Day people start Greeting Happy New Year to everyone around. At several places there is also a tradition to kiss one’s beloved at midnight. It is said that kissing ensures affections and ties will continue all through the year. To dear ones staying in distant cities, greetings are sent over phone or through SMS and New Year greeting cards.

Many countries take pride in their New Year’s Eve celebrations but New Year’s Eve of Times Square, Trafalgar Square and Sydney are most popular amongst them all.

New Year’s Eve celebration of Times Square, New York city is one of the most popular New Year’s eve celebrations around the world. The event is noted for the famous ball drop atop One Times Square. Every year, thousands of people from across the world descend upon Times Square to experience this traditional event.

This is yet another most popular New Year’s Eve celebrations. Each year thousands of revelers throng the Square to welcome the New Year to the sound of Big Ben’s famous chimes.

Sydney is said to be the world’s preferred destination for New Year’s Eve celebrations. Breathtaking firework display is said to be the major attraction that pull thousands of people to Sydney from all over the world. An estimated 80,000 firecrackers are shot from Sydney Harbour Bridge on the New Year’s Eve, offering a truly stunning view. The other major attraction is The Harbour of Lights Parade. It is a delightful sight to watch cruise boats covered in fairy lights cruise the centre of the harbour all night.