This festival is celebrated with great deal of enthusiasm and energy not only by the people of Bengal but also by the Tribal people in hilly areas. For them, it is the time to say adieu to the past year and welcome New Year by following religious norms. 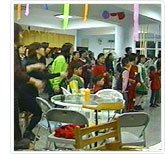 Almost all Bengalis decorate their houses with fresh flowers and draw rangolis in front of the entrance door. Rangolis are usually made of colored rice and it is known as “Alpana”. An earthen pot bearing the symbol of Swastika is kept in the middle of rangoli. It is believed to bring in wealth and symbolizes a prosperous New Year.

On this day, women wear traditional Red and White Sari while men wear dhoti kurta to take part in the early morning processions called Prabhat Pheries. Some even go to the nearby river for a holy dip. It is said water of the river washes away all the sins.

After this idols of Lord Ganesha and Goddess Laxmi are worshiped for the well-being and longevity of the family members. Praying to the clouds for water is another popular ritual of the Bengali New Year. As per the tradition, people are supposed to pay off all the loans and old dues with the customers are to be settled. On this day, Bengali businessmen purchase new accounts books and prepare new accounts called as Haalkhata.

At some places, people also perform dances, sing songs or recite Bengali Nabo Barsho poems. Amidst all feasting, food is the main focus.