The Baby New Year personifies the start of the New Year and is one of the most popular symbol of New Year Eve celebrations. The Baby New Year is a cute and chubby baby who wears nothing more than a diaper and a sash across his torso that shows the year he is representing. This Baby New Year quickly grows up into a elderly bearded man or Father Time (represents the year which is coming to an end) at the end of his year. At this time, he hands over his duties to the next Baby New Year.

The image of Baby New Year is very much popular in China. Besides, depicting the beginning of the New Year, here Baby New Year represents happiness, strength, good luck and prosperity. 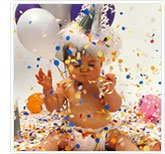 It is said that the custom of using a baby to depict the beginning of New Year began in Greece around 600 BC. At that time, the Greeks honored their God of Wine – Dionysus, by parading a baby in a basket. This ritual represent the annual rebirth of Dionysus as the spirit of fertility.Besides, early Egyptians are also said to have used the baby as a symbol of rebirth.Early Christians denounced the practice of using a baby as they felt that the custom was Pagan in nature. But the significance of baby as a personification of rebirth later forced the Church to reevaluate its position. Eventually, it was decreed that Church members would be permitted to celebrate the New Year using a symbolic baby, provided it illustrated the birth of the baby Jesus.

The use of a baby’s image as a banner for New Year celebrations was brought to America by the Germans, who had used the effigy since the 14th Century.

Commercial Use of Baby New Year

In recent times, Baby New Year is being widely used for commercial purpose.One can find the colourful image of Baby New Year being used in various types of banners, posters and New Year Cards. Banners and posters with Baby New Year image has become an important part of New Year decorations.